Below is a brief overview of the recommended augmented reality (AR) interaction flow to use with AR Controller. The AR side of the system is handled by Unity’s AR Foundation, which is explained briefly here. The AR Controller SDK sits within the AR Foundation framework, which allows you to tangibly reach into any AR experiences that you make. The following sections explain the objects that make up the AR Controller interaction system. The AR Controller showcase scene provides a smorgasbord of example implementation of the components described below.

The easiest way to get started with AR Controller is to take a look at the AR Controller showcase scene: it illustrates some basic types of interaction that can be achieved using AR Controller. You can then use the demo objects as a basis for your own interactions.

It is highly recommended that you look through the features available in the AR Controller showcase before getting started with your own project. Future updates and new AR Controller interactions will be demonstrated in the showcase.

The Floor object represents the height of the ground in AR space, which is updated by the World Interpreter script (via the Ground Plane Unity Inspector field). Objects that rest on or interact with the floor should have the Floor object as their parent - this will ensure they don’t get occluded (visually or physically) by the Ground Plane object.

The Ground Plane object hosts a large box collider, which is positioned as a child of the Floor object to prevent objects from falling through the floor - this simplifies AR scanning of the floor, as the entire floor becomes physically present after choosing a single point on the scanned floor.

The Ground Plane object also hosts two different meshes - one for use in the Unity Editor (shows a visible plane), and one for built AR apps (implements AR occlusion and shadows). These are automatically deleted from the Editor/ builds as appropriate.

The Showcase object collates a variety of interaction prefabs into a small platform that is suitable for manipulation in AR. The interaction prefabs serve as examples of how to implement interactions with the AR Controller Pointer. The examples can be navigated by using the AR Controller pointer to click the arrow buttons on the showcase platform. Inspect these objects in the Unity Hierarchy window to learn more about how to implement different interactions, and look here for more details.

Note: the Showcase object is set as the Focus Object of the ARManager on the ARControllerARSessionOrigin object - this ensures it is positioned correctly when a ground plane is selected.

More information about how these showcase objects work is provided here. 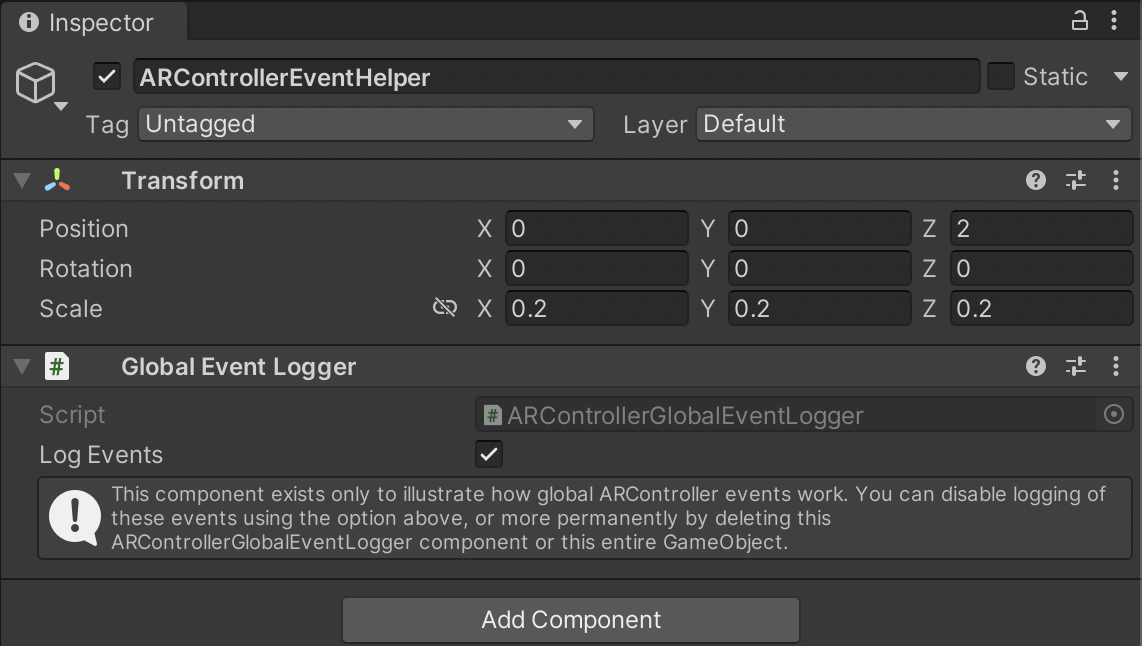